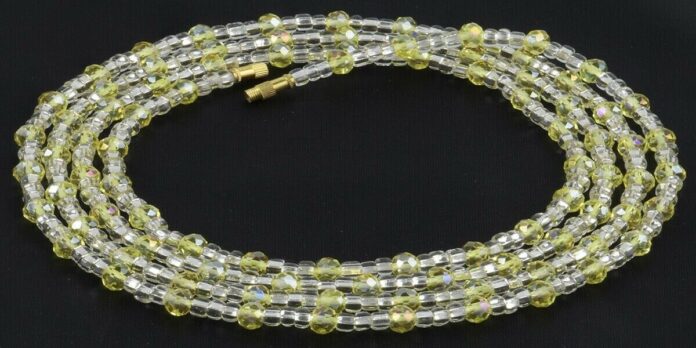 Waist beads are jewelry that dangles from the wearer’s hips or midsection. Waist beads are a traditional African accessory worn by women to express a variety of positive feelings about their waistline, including pride in their attractiveness, a sense of sexuality, femininity, fertility, health, and maturity.

Waist beads are often strung on cotton fabric, twine, thread, wire, transparent cord, or elastic cord and can be composed of glass, metals, crystals, jewels, charms, wood beads, or plastic beads. There might be cultural, personal, or esoteric significance to the choice of hue and material.

The Cultural Role of Beads in Ghana

In Ghanaian society, beads hold a special place of honor. They have deeper symbolic meanings in the ceremonies and traditions of its people from birth to death than simple forms of expression. In Ghanaian society, beads serve mostly as adornment. But, they are also vital means of interaction since the language of color is utilized to convey meaning, concept, and symbol.

The Symbolism of Ghanaian Belts

One of the most often imitated forms of Ghanaian fashion is the African ghana waist beads. Multiple strands of seed or glass beads in various colors are traditionally wrapped around a female’s waist to emphasize and highlight her femininity. But there are other meanings associated with them as well.

Mothers give their daughters waist beads as a rite of passage in the Ashante and Krobo tribes. The beads or bells of bigger size are added as she achieves sexual maturity.

That is done so that the walking sound made by the beads signals to suitors that she is single. Nowadays version of the Waist Beads is a weight-management aid. Simply put, you need to slim down if they turn up your waist.

A purpose definition is an initial stage in the creation of waist beads in many cultures. Then, the string is sized based on the wearer’s waist or hips. The next step is to select the desired beads and string them. Finally, the waist beads are secured by clamping them together, tying a knot, using a crimp lock, or even burning them.

Beads In Traditional Ceremonies In Ghana

The Krobo use glass beads extensively in their rites of passage, known as “Dipo.” Beads are traditionally placed around a girl’s waist, ankles, and neck as she comes of age in preparations for her public debut. The only purpose of some types of beads is to look pretty.

Pendants worn around the neck, on the other hand, provide a prospective suitor with important details about her family, tribe, and money. In most cases, a girl’s affluence may be inferred by the size of her beads.

Beads in Ghanaian culture have deep spiritual significance. Cattle bone beads hold a special place in the culture of many tribes because of their animistic beliefs. Traditional Venetian Trade Beads and beads made of wood and glass with an “evil eye” design are worn by the Krobo and Ashante for spiritual protection.

In many cultures, beads are considered sacred relics that should be passed down from generation to generation so that future generations may benefit from the accumulated wisdom of those who came before them.

Wearers are always aware of even the smallest fluctuations in their weight. They don’t provide in any way to more bulk, instead rolling or tearing. Moreover, it is often held that African women’s famously curvy figures might be attributed partly to their habit of donning such beads from an early age.

Customize your Wedding Stage with the services of Alibaba

Isabella - January 18, 2022 0
The goal of every player on the FIFA Ultimate Team is to acquire enough Fifacoins to build up their dream team. To acquire card...

Isabella - April 26, 2021 0
Please use the sharing devices found by means of the share button on the excessive or side of articles. Copying articles to share with...

Customize your Wedding Stage with the services of Alibaba

Things You Should Know About Ghana Waist Beads

ABOUT US
We brings to you the latest and most popular news related to every kind of business. Our platform contains news related to Business.
© Copyright 2021. All Rights Reserved.